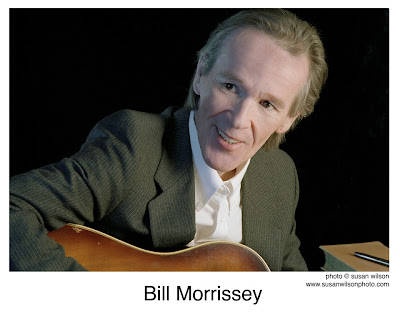 The world does not operate on an ironic level. Whether one's belief system is based on religious faith or scientific fact, no one imagines the forces of heaven, nature, or science finding ways to amuse, sadden or bedevil us through strange juxtapositions of events. So I won't say it's ironic that on the same day trainwreck popstar Amy Winehouse's death was on the front page of newspapers around the world, the widely unknown but brilliant New England folksinger Bill Morrissey also passed away. Instead, I'll just point out it's a sad coincidence.

But you could write an ironic novel tracking two characters like Winehouse and Morrissey, their divergent careers and their problems with substance abuse (Morrissey was an alcoholic). In the first chapter, they could be on the same airplane, her in first class, him in coach. Later that night, she plays Madison Square Garden and he's at the Bitter End. You could set another scene at the Grammy Awards, with Winehouse sitting front row, taking home a handful of trophies, while Morrissey (nominated for Best Folk Album for his Songs of Mississippi John Hurt) sits in the back and goes home empty handed. Near the end of their lives, she cancels an arena tour after a drug-addled, incoherent performance; he overcomes his alcoholism, deals with his depression, and goes on tour for a series of house concerts. Then, on the same day, she dies of a probable overdose, while he passes away in his sleep, his body simply shutting down.

Morrissey was one of my favorite folksingers: his albums Standing Eight and Inside were masterpieces of small town life and working class poetry. The song "Last Day of the Last Furlough" is one of the most heartbreaking ballads I've ever heard. I can't even listen to the song "These Cold Fingers" anymore; it's too damn painful when he has to put down his dog. He wrote an excellent autobiographical novel about a folksinger, Edson, that had the same virtues as his songs. His concerts were low key, intense, and occasionally very funny. I'm sad to learn he's gone, but glad to hear he was dealing with his issues and had found a measure of contentment in the last year of his life. On one of his later albums, he wrote a song called "Letter From Heaven" about the afterlife--let's hope he was telling it as it is:


“And me, I couldn’t be happier
The service here is fine
They’ve got dinner ready at half-past nine
And I’m going steady with Patsy Cline
And just last night in a bar room
I bought Robert Johnson a beer
Yeah, I know, everybody’s always surprised to find him here."
If you don't know his work, you should seek it out. You can start with these two live Dylan covers:

Don't Think Twice, It's Alright
Girl From the North Country
Posted by Jay Ess at 11:56 AM

If I am infringing on your copyright in any way, please let me know and I will immediately remove the content in question. My goal is to share great, commercially-unavailable music and help fans discover artists they will support.